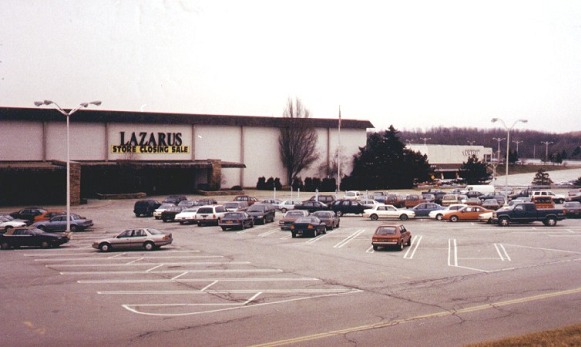 Lazarus vacates its building as shown in the photo, further contributing to the irreversible decline of Greengate Mall.

By the time Lazarus closed in early 1998, only Montgomery Ward was left as an anchor tenant, seriously weakening Greengate’s ability to attract customers. Additionally, it would make a sale of the mall to prospective buyers much more difficult. This led Rouse to finally put the center up for auction in mid-1998. In August of the same year, the mall was sold to the New York Property Holding Corporation (NYPHC) for $1.67 million, well below its actual market value. Although the mall was now in the hands of a new owner, the year would end on a dismal note as local businessman and potential bidder Harry Overly passed away on December 14, 1998 at the age of 68. Greengate would lose yet another tenant by late 1998 as Eckerd, formerly Thrift Drug, moved to a freestanding store across from the mall on U.S. Route 30. In February 1999, NYPHC filed a civil lawsuit against Federated Department Stores, Inc. in Westmoreland County Common Pleas Court, contending that it breached a contract when it closed its Lazarus store in March 1998. According to the lawsuit, when the mall was built in 1964-1965, the former owners transferred land to Horne’s in exchange for its agreement to anchor the mall for 95 years, although official records indicated that Horne’s signed a 99-year lease agreement in late 1963. The suit also claimed that Federated, which purchased Horne’s in 1994, was obligated to operate its Lazarus store at the mall until 2015. The parties would reach an agreement out of court by May 2001.

An entertainment facility called the Twilight Zone Dance Club, Restaurant and Lounge opened for business on the mall’s lower level in the summer of 1999. Occupying the former Lang’s space, the 13,000 square foot (1,208 m2) venue was initially focused on hosting music performances as part of its operations, but almost immediately, it became a site of underage drinking, drug activity and violent confrontations among patrons. That same year, Kickers for Kids, the mall’s last charter tenant, and the Carmike Cinemas triple-screen movie theater, which had been located in the Greengate North Plaza, went out of business. Ladbrokes, which was not immune to the mall’s irreversible decline, also closed its doors in September 2000, ending a 10-year relationship with the mall. By late 2000, Greengate would only be at 25% occupancy. In early 2001, Club Cabana, formerly the Twilight Zone Dance Club, was shut down by its owners following a series of problems that plagued the facility. Soon after, the same owners opened Bellisario’s Italian Restaurant in the space formerly occupied by Ladbrokes and reopened the club, now called Panama Jim’s, this time, alcohol-free. Montgomery Ward, the mall’s last anchor tenant, filed for bankruptcy in December 2000 and announced that it would be closing all of its stores nationwide. 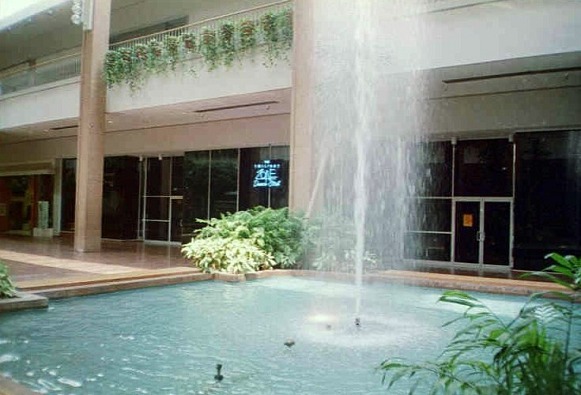 The fountain would become one of the last signs of life in the nearly empty mall.

Following the closure of Montgomery Ward in early 2001, NYPHC began looking at redevelopment options, among them turning the mall into a facility housing call centers, back-office operations and telecommunications companies. Despite its efforts, the telecommunications industry took a nosedive. As a result, demand for space for switching equipment plunged. Subsequently, NYPHC issued lease termination notices to the handful of tenants remaining at the mall in July 2001, although Bellisario’s Italian Restaurant and Panama Jim’s were the only tenants not to receive eviction notices. Nonetheless, the establishments closed for business two weeks later. At the same time, Greengate’s maintenance and security operations were dissolved, and its escalator and air conditioning units were also turned off. Over time, the lack of maintenance and climate control would lead to the mall’s physical deterioration, which became increasingly apparent prior to the mall’s closing in August 2001. Its rust-colored floor tiles had begun to buckle on the lower level due to the heat and trash cans were strategically set in certain areas of the mall to catch leaks from the ceiling. Even the large trees and potted plants that had beautified the mall’s concourses were turning brown. Practically rotting away, Greengate Mall was now a shell of its former glory.