Bellisario’s Italian Restaurant, located in the former Ladbrokes off-track betting center, was one of the last businesses to operate at Greengate Mall before closing its doors in 2001.

In December 2002, St. Louis-based THF Realty announced plans to acquire the vacant Greengate Mall and to demolish it to build a new hybrid power center on the site. Despite lawsuits seeking to derail the sale of the property, THF purchased the site for $8 million in February 2003, and demolition on the mall’s western façade began in early May, following asbestos removal work. By June, large sections of the façade had been torn down, revealing what was once the mall’s Center Court. Demolition had also begun at the former Montgomery Ward building. On the inside of the mall structure, bulldozers knocked down walls and cleared out debris from Greengate’s former stores, which had been thrown outside into a pile, awaiting for removal. Throughout the entire duration of the project, hundreds of trucks carrying thousands of pounds of material left the Greengate site, bound for the appropriate landfill or recycling center. By the following month, crews turned to the former J.C. Penney building. The concrete pillars that had supported the huge arches on the retail building’s western fringe were brought down one by one. On one of the parking lots, an escalator from one of the mall’s department stores sat mangled on the ground.

The panorama of the former mall was now radically changed, devastation in the midst of dozens of inoperable light poles scattered throughout the mall’s parking lots. A small section that was once part of the Center Court was all that remained of the mall structure, which was attached to the still standing Lazarus building. It would eventually be demolished in late July, leaving the former department store building to stand alone. The large concrete pad on which Montgomery Ward once stood could now be seen from U.S. Route 30. Nearby, the J.C. Penney building had also been completely razed. The only remnants of the three-story structure were sections of brick wall that formed the loading dock area. At the former Lazarus building, crews worked on tearing down the southern façade of the structure fronting the busy highway. Looking through the entrance of the vacant structure, one could see the Greengate North Plaza, located towards the rear of the mall property. The demolition of the Lazarus building concluded in mid-August. 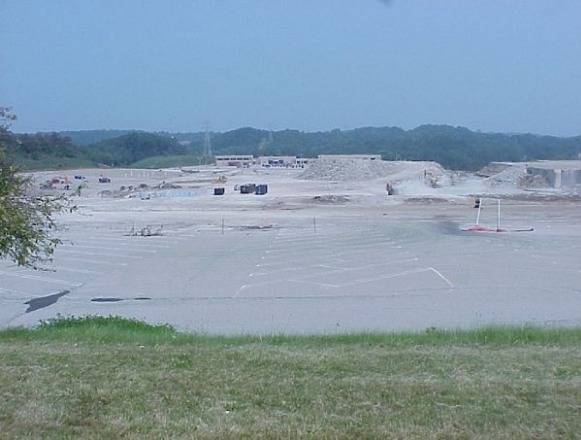 The remains of Greengate Mall.

Following the razing of Greengate Mall, construction crews began to start the process of raising the existing elevation of the property some 39 feet by moving one million cubic yards of dirt onto the site, which would take several months. The western hillside containing the auxiliary employee parking lot was also flattened via use of dynamite. Construction of the new power center, which was now named Greengate Centre, subsequently began in mid-2004. On April 13, 2005, the long-awaited Wal-Mart Supercenter opened its doors to a crowd of shoppers, marking the beginning of a new era for the Greengate site. Several other retail shops and restaurants would soon follow. The nearby Wal-Mart at Hempfield Plaza was demolished to make way for a new Sam’s Club, which opened on January 31, 2006. In November 2006, THF Realty acquired the nearby Greengate East shopping center, adding 70,000 square feet of retail space to its existing portfolio and expanding its ever-growing presence in Hempfield Township.