The planning and development of Greengate Mall began as a collaboration between Community Research and Development, Inc. (CRD) of Baltimore, Maryland and architecture and planning firm Victor Gruen Associates in the early 1960s. By October 1963, the acquisition of approximately 113 acres of land on the north side of U.S. Route 30 in Hempfield Township for the mall’s development was underway. The mall proper would be constructed on a 55-acre parcel, referred to as Tract 55 in archived documents. Later additions to the mall property, such as the Greengate North Plaza in the late 1970s, would be constructed on a 35-acre parcel, or Tract 35. Tract 8 is the name given to the 8-acre parcel in which the Greengate East shopping center would be built in the early 1980s. The remaining 15 acres on the western end of the site would be called Tract 15.

To anchor the new mall development, CRD approached the Joseph Horne Company, a Pittsburgh-based department store chain. Upon having reached a 99-year lease agreement in late 1963, construction on the Horne’s building would begin in early 1964. By May of the same year, the steel structural frame for the department store had emerged, while construction had started on the structure for the rest of the mall. 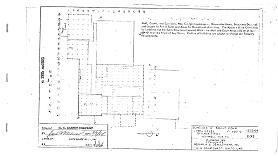 Architectural floor plan drawings for Greengate Mall, dated December 23, 1964. Click on the thumbnail images above to view an enlarged version in a new browser window.

Planners at Victor Gruen Associates envisioned wide, open courtyards and high ceilings with skylights as part of Greengate’s architectural design. On the other hand, Victor Gruen’s modernist aesthetic of plainness was not quite what James W. Rouse wanted for his mall. When Rouse paid a visit to Greengate just months before its scheduled opening in 1965 to observe the construction progress, he was distressed at how the building contractor had interpreted Gruen’s architectural plans, which resulted in large construction cost overages. Moreover, James Rouse’s brother Willard, a partner in CRD who was also heavily involved with the development, concurred with the assessment of Greengate’s appearance. Ironically, Willard Rouse likened the mall structure to a church, a typically town-based and community-friendly building.

Greengate Mall officially opened on August 18, 1965 with a well-publicized grand opening ceremony. The 420,000 square foot (39,018 m2) mall featured anchor tenant Joseph Horne Company and approximately 45 stores. Hoping to get a glimpse of the new mall’s amenities, shoppers and visitors alike swarmed its vast, gleaming corridors. A novelty at the time of its opening, it was the first time that many residents got to experience an enclosed, climate-controlled main street setting right in their backyard.

Over the next few years following the mall’s opening, CRD would make modifications to the existing structure in order to accommodate a J.C. Penney store at the north end of the mall and a Montgomery Ward to anchor the east end. CRD had also investigated the possibility of adding a complex of 440 garden apartments in two sections of the mall property, however, it was determined that the plan was not feasible. This inquiry represented some effort on CRD’s part to turn the mall property into something more closely resembling a multi-purpose community.

Life Within The Walls