Life Within The Walls

As with their previous mall projects, developer James W. Rouse and architect Victor Gruen aimed to create a new and different kind of community center for Hempfield Township and the areas surrounding it. After all, the allure of modernity and novelty was an easy sell for mall developers. Following its opening in 1965, Greengate Mall would gradually integrate itself into and shape its suburban setting in Hempfield. It would also provide a valuable gathering place – a town center for the local community. For many local families and visitors alike, routine excursions to the mall was common practice. This kind of loyalty and community spirit would continue for many years until it began to deteriorate in the early 1990s.

In terms of generating novelty in the likes of the traditional downtown holiday celebrations in Greensburg, Pittsburgh and many other cities, Rouse conceived with the idea of building a spectacular annual Christmas display in the mall’s enormous Center Court. Once a prominent highlight of Greengate’s dominance and a product of intricate and intensive planning, the nostalgic holiday displays attracted thousands of visitors from all over Westmoreland County and beyond, and provided lasting memories for mall patrons as well as store employees. Furthermore, in William Severini Kowinski’s The Malling of America: Travels in the United States of Shopping, the author gives detailed insight into the holiday extravaganza and the complexity and cumbersome procedure of planning and building the displays, which were different from year to year. 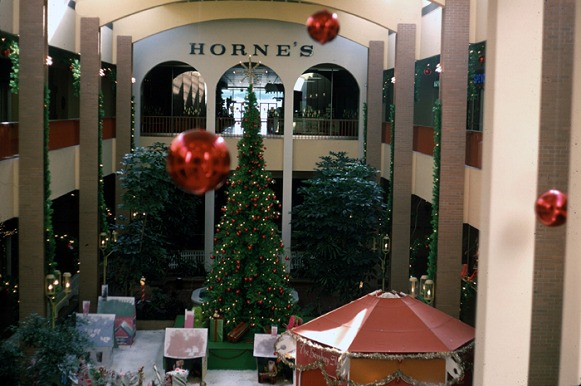 Center Court decked out for Christmas in 1967.

The allure of novelty at Greengate Mall was not limited to its annual Christmas celebrations. To complement Greengate’s architectural style, Rouse would also add a series of ornamental fixtures throughout the mall’s concourses. One such feature to be implemented was a huge birdcage that was placed in the midst of the Picnic at the Gate food court on the upper level. An attraction in itself, the birdcage was a popular destination for patrons, particularly children. Although bird-watching was very much a communal activity at Greengate, movie-watching would also come in the form of a brand new triple-screen movie theater, situated to the north of the mall proper. The 1,200-seat theater, operated by Boston-based General Cinema (later Carmike Cinemas) opened on May 27, 1977 in the then-new Greengate North Plaza. The opening attractions were The Sting, Day of the Animals and Cross of Iron.

Greengate Mall would host its fair share of special events and family-oriented activities through the years, adding to the appeal and functionality of the center. It was this concept of marketing that benefited both retail tenants and the local community, attributable to James Rouse’s innovative techniques. Likewise, roughly half the tenants at Greengate were small businesses, so-called “mom and pop” stores not tied to large retail chains. Rouse believed strongly that a shopping center should contain a plethora of independent retailers to complement the burgeoning chains. This led to the closeness among workers, some of whom were employed at the mall for over 30 years. The family feeling was also a catalyst for romance as some eventually turned to marriage.

Auto shows were a common occurrence at Greengate Mall as depicted in this late 1960s photo.

To this day, a sense of sadness and loss over the closure is felt among the many patrons and employees of the mall. Some say that Greengate’s last chance for survival was lost when Harry Overly, a former mall manager and the capital programs director for the Rouse Company, died in December 1998. Overly and a few other local businessmen had the intent to acquire Greengate Mall and revitalize it. Or, as Len Stahlberg had said, Well, it certainly needs more than a paint job. I think the mall still has potential. There are experts in the field who specialize in turning around malls in smaller markets. There’s still a window of opportunity, but it’s closing fast. Stahlberg was the owner of Kickers for Kids, formerly Junior Shoe World, until June 1999. He was also president of the mall’s merchant’s association.