During the late 1980s, the Rouse Company engaged in a series of capital improvements at Greengate Mall. It would also explore the possibility of further expansion at the center with a new department store anchor, among other retailers, although nothing ever materialized. In 1988, Rouse began a two-year remerchandising program with more than 100,000 square feet (9,290 m2) of space remodeled or leased to new merchants. The Picnic at the Gate food court also expanded with a broader variety of eateries in 1989. Despite the changes, the early 1990s would mark the beginning of a transitional phase for Greengate Mall as a major expansion of Westmoreland Mall entered its planning stages. Ladbrokes opened its 23,717 square foot (2,203 m2) off-track betting (OTB) center next to J.C. Penney on January 31, 1991. The $3 million dining and wagering facility was the first OTB site in an enclosed shopping center in the United States. The opening of Ladbrokes was instantaneously successful, but by late 1991, anchor tenant J.C. Penney had other intentions as it announced plans to relocate its retail operations to Westmoreland Mall and close its existing store at Greengate. After two years of construction, the $33 million renovation and expansion project at Westmoreland was completed, along with a 126,994 square foot (11,798 m2) J.C. Penney as its centerpiece. The department store opened for business on May 2, 1994.

The closing of J.C. Penney at Greengate Mall would leave the northern end of the mall without an anchor tenant. Although rumors and speculation about the vacant space’s replacement tenant persisted following the store’s closure, the building would remain without a permanent retail tenant. Nevertheless, it would almost immediately be put into use as an exhibition facility. Faced with the prospect of declining business attributed to J.C. Penney’s departure, tenants such as Mellon Bank, Elby’s Big Boy Restaurant and G.C. Murphy and Co. eventually closed in 1994. These closures would coincide with the acquisition of Horne’s by Cincinnati-based Federated Department Stores, Inc. (now Macy’s, Inc.), the parent company of Lazarus, with the transition to take place well into 1994. By then, Rouse would attempt to reposition the mall into a value-oriented retail format, replacing the former anchor spaces with large-scale “category killer” retailers such as Dick’s Sporting Goods and T.J. Maxx. In February 1995, Rouse officially put the mall up for sale, claiming that it wasn’t performing up to its earnings standards. Many bidders including the Glimcher Group and J.J. Gumberg Co. expressed interest, but nothing had ever been finalized. By mid-1995, Greengate Mall was at 75% occupancy with approximately 70 tenants, including Lazarus and Montgomery Ward. 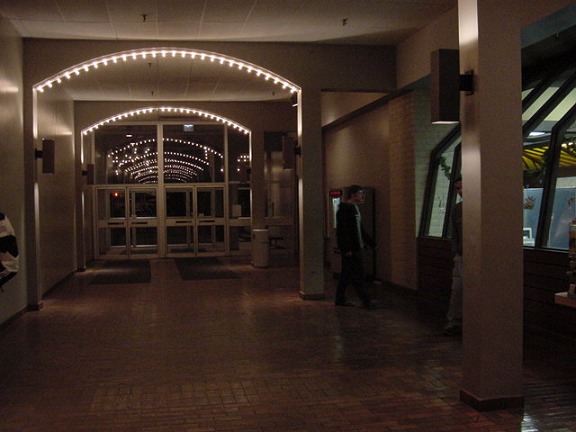 The former Elby’s Big Boy Restaurant (seen far right) was one of many Elby’s locations that had operated in Western Pennsylvania until the late 1990s.

In the world of retailing, the message is movement. A campaign to recruit tenants from Greengate Mall to Downtown Greensburg was enacted by former Greensburg councilman-turned-city ambassador John Finfrock in March 1995. While the development of Greengate in the 1960s prompted many retailers in search of greater exposure and market share to relocate to the mall from Greensburg’s business district, the result would be a steady decline of the downtown core. Likewise, the decline of Greengate left tenants with limited options, including relocation. Yet, on the other hand, a number of store owners remained warily optimistic that the mall would rebound, despite Rouse no longer signing long-term leases with tenants in order to allow a new owner freedom to make changes. By mid-1997, a growing number of retailers including Kamps Shoes, the Kitchen Shelf and Jo-Ann Fabrics had vacated the struggling mall. After months of rumors, Lazarus officials announced that it would end its 32-year stay at the mall in late 1997, citing the mall’s deteriorating business environment. Mal Roseman, Lazarus’ senior vice president and its top Pittsburgh-area executive, commented on the departure of Lazarus for a news article in the Tribune-Review. Like anything else, you have to analyze the business, Roseman said. Greengate had been unprofitable for a long time, well beyond Lazarus having taken over. The problem with the store is more the mall. The mall has deteriorated. There are tons and tons of vacancies. Lang’s Fashions, a women’s clothing store on the mall’s lower level, also closed in late 1997.