The 1950s to the 1970s brought massive changes in retailing as the construction of shopping malls across the United States virtually transformed the urban landscape. Likewise, Greengate Mall led to a shift in shopping patterns among residents who once shopped in Greensburg’s business district. Retailers that once lined the city’s main thoroughfares relocated operations to the mall, resulting in the eventual decline of the downtown core that began following the mall’s opening in the mid-1960s. In its later years, Greengate would also overcome its inability to grow and expand, ultimately sealing its fate. Potential anchor stores included Pittsburgh-based Kaufmann’s and the nationally recognized Sears, Roebuck and Company, both which had expressed interest in coming to Greengate Mall. However, CRD’s commitment to it and some of its older properties were being hindered in favor of investment in newer shopping centers. This was the catalyst for the development of Westmoreland Mall, five miles to the east. 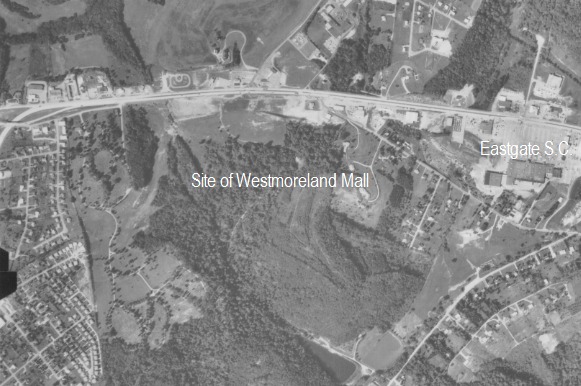 1967 aerial photo of the Eidemiller tract, now occupied by Westmoreland Mall and other businesses.

In the mid-1970s, local developer Eidemiller Enterprises, Inc. (now Adam Eidemiller, Inc.) originally proposed building a motel on land that it owned, but eventually decided that it was not the best use of the property. The proliferation of shopping malls at the time led Eidemiller to consider developing a regional mall on the site. It would attempt to secure Kaufmann’s as an anchor tenant but parent company May Department Stores initially rebuffed. The extensive nature of the project led Eidemiller to Murray Goodman, president of the Goodman Company, an Allentown, Pennsylvania-based development firm. Goodman’s successful experience with large developments was the key to making the project more appealing for potential tenants such as Kaufmann’s, which eventually committed to a new store at the mall development. In addition, Sears chose to move its retail operations a mile east to the new mall from its smaller location, now the Davis Center, along East Pittsburgh Street. The construction of Westmoreland Mall began in 1975, and Kaufmann’s became the first store to open at the complex in late 1976.

Westmoreland Mall opened for business on February 28, 1977 with Kaufmann’s and Sears as the anchor stores and 89 other tenants on two levels. With an area of 850,000 square feet (78,965 m2), it overshadowed Greengate’s 650,000 square feet (60,385 m2) of space. The mall’s South Annex (now Westmoreland Crossing), originally anchored by Shop ‘n Save, opened in 1978. The mall continued to grow with the addition of Troutman’s and 80,000 square feet (7,432 m2) of additional retail space in 1979, and the convenience center at the South Annex was constructed in 1984, with 40,000 square feet (3,716 m2) of space for 12 to 15 new stores and restaurants. At this point, Greengate Mall was beginning to suffer from its inability to reinvent itself when market conditions changed, despite having undergone a significant facelift in 1981. Nevertheless, Greengate remained a strong retail and community presence. By the mid-1980s, CRD, now called the Rouse Company, began making plans to sell off any malls that didn't fit the company’s portfolio. Greengate was slated for sale, as was Rouse’s other Pittsburgh area center, Northway Mall. 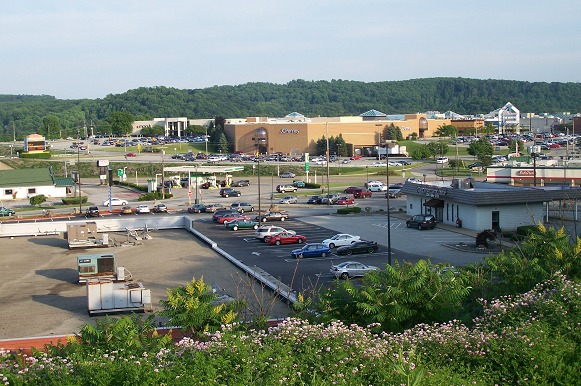 The sprawling Westmoreland Mall complex and its surrounding commercial district east of Greensburg offer local residents a plethora of choices.

With the increased pressure of two major malls outside the city limits, commercial activity in Downtown Greensburg was noticeably shifting away. Troutman’s, once the largest department store of the city’s pre-mall era and the flagship of the former chain, finally closed its doors in 1985. Its sister store at Westmoreland Mall was converted to Pomeroy’s before being acquired by the parent company of The Bon-Ton in 1987. In recent years, a large portion of the former Troutman’s building has found a new use as an office and senior living facility. Similar revitalization projects such as the restorations of the Palace Theater and the historic Train Station are aimed at repositioning Greensburg as a business and cultural center. During the late 1980s, the area surrounding Greengate Mall began to go through a metamorphosis into a major commercial corridor with the construction of the Amos K. Hutchinson Bypass. However, major changes were about to be played out at cross-town rival Westmoreland Mall, as its owners prepared to expand the mall by 20 percent.